Here is the final snapshot of milw0rm.com 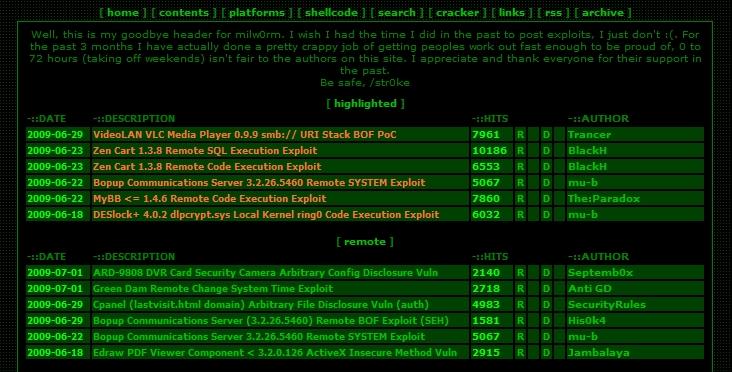 The creator, str0ke has put the following note citing his busy schedule as reason for the close down…

Well, this is my goodbye header for milw0rm. I wish I had the time I did in the past to post exploits, I just don’t 🙁 .  For the past 3 months I have actually done a pretty crappy job of getting peoples work out fast enough to be proud of, 0 to 72 hours (taking off weekends) isn’t fair to the authors on this site. I appreciate and thank everyone for their support in the past.  Be safe,  –  /str0ke

Finally site was completely down yesterday just few days after the final note appeared on the site.

This sudden and mysterious closure of popular security website has raised the eyebrows of almost everyone in the security world. As per the DNS records, milw0rm was registered up to year 2014, so there was no need for sudden close down even though creator has no time to work for it.  The site would have taken life on its own with so many security passionate people ready to assist …

But again the big fish’s end will come sooner or later since  “Everything which has the beginning has an end”.

Surprisingly Milw0rm.com has come up again with all the previous notes removed and already new exploit is published today. Looks like str0ke got up from dream 🙂