Recently we had released our first hash based tool called HashGenerator – a universal hash generator tool supporting around 14 hash algorithms.  On the same lines today we are releasing another new tool, HashCompare which is a file integrity comparison tool.

HashCompare performs Hash based integrity comparison using any of the the popular hash algorthms such as MD5, SHA1 or SHA256. To make the task easier and quicker, it also supports the ‘File Drag & Drop’ feature. That means you can just drag & drop one or both files directly without wasting much time in selecting them. 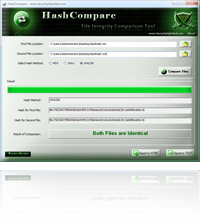 Here are some of the main features of HashComapre

For more information and to download, move on to main page of HashCompare.