M$ has become more stronger with Windows 7  in terms of eradicating  the piracy with its introduction of  Windows Activation Technology. (in short WAT). However hackers have grown even more smarter since then to beat this WAT as always they are one step ahead of the industry.

WAT is the new name given by the M$ for its previously known WGA ( Windows Genuine Advantage) and WPA (Windows Product Activation)  designed as anti-piracy technologies for  providing strong activation and validation built into Windows 7.

Though WAT has helped M$ to reduce the piracy of Windows 7 , it also ignited the hackers out there to come up with unique and smart way to live up to this challenge. As a result many tools have evolved to bypass this WAT protection.

RemoveWat created by Hazar and nononsence  supports all versions of Windows 7 on both 32 bit as well as 64 bit platforms. Once the Windows is installed you can directly run RestoreWAT to completely disable the Windows activation.  Also you don’t have to put any product keys. It also supports silent (/s switch) option which is useful if you are integrating it with automated Windows installer.  Once removed, it prevent all sort of nag screens, WAT prompts or watermark screens.  It also supports restoring WAT so that one can easily revert back to original state.

Chew-WGA, like RemoveWAT works across all versions of Windows 7  with support for 32 bit and 64 bit platforms. It support all language versions of Windows 7.  Once WAT is removed successfully, you can continue to receive regular Windows updates without any problem. It also claims to provide protection against any hot-fixes.  Like RemoveWAT it also features ‘Revert’ option to restore the Windows to original state at later times. 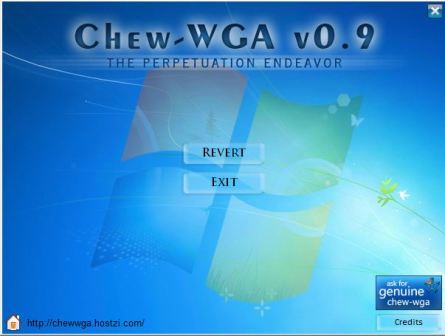 Both of these tools are very simple to use and work flawlessly, all credits to the creators of these smart tools.  M$ has released special update ( KB971033) to protect WAT against such tools,  so you may have to use these tools after the fresh installation before updating it.  Also after using these tools you may have to watch against this (KB971033) update.

Though it is not recommended to use these tools as permanent solution against WAT but these tools are useful when you wants to extend the existing Windows activation period.

Note:  This post is provided here for information and educational purposes only.