FirePasswordViewer has crossed 50,000 downloads and it is the first tool from SecurityXploded.com to achieve this feat. FirePasswordViewer is the GUI version of popular FirePassword tool to recover stored sign-on passwords from Firefox.  Like other browsers, Firefox also stores the login details such as username, password for every website visited by the user at the user consent. All these secret details are stored in Firefox sign-on database securely in an encrypted format. FirePasswordViewer can instantly decrypt and recover these secrets even if they are protected with master password. 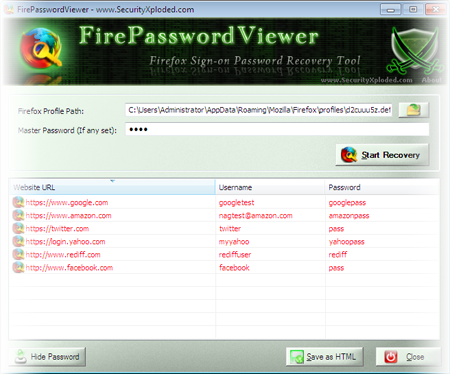 FirePasswordViewer was released to public on 10th July 2009 and since then it has been top downloaded tool in the SecurityXploded.com portal.  In less than a year it has overtaken all the previously released tools and crossed 50,000 mark. Also note that this is only official download count which does not include statistics from the  download potals and other mirror sites.

Even our other fast growing tool, GooglePasswordDecryptor is also catching up and has also crossed 50,000 download milestone.Compared to FirePasswordViewer, it is rapidly growing as it was released just 6 months back.

You can view more detailed facts about all the tools on the official statistics page.