Today we have released our new tool, DownloadHashVerifier – 56th tool from SecurityXploded.com.  This is a FREE tool to easily & quickly verify the integrity of your downloaded file. 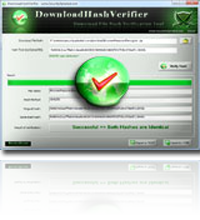 Hash verification is a standard mechanism used to verify that downloaded file is original and not tempered. Often it happens that hackers modify the download files on the server and plant it with trojans/spywares. Upon downloading and installing such softwares your PC will get infected eventually. To prevent such things, websites generally publish MD5 or SHA256 hash of the original file so that you can verify the same after you have downloaded the file.
.

DownloadHashVerifier is designed to make this hash verification task easier and faster for end users.

Here are the smart features of DownloadHashVerifier