If you had seen our announcement yesterday, we had released MSNPasswordDecryptor but later it come to our notice that there is already another Spyware tool with the same name all over the net. Hence we are forced to re-launch our tool with slightly different name to stay away from the bad name in the greater interest of our partners and all our users.

MSNLivePasswordDecryptor presents both GUI interface as well as command line version, the later is more helpful for Penetration testers in their work. Apart from normal users who can use it to recover their lost password, it can come in handy for Forensic officials who can get hold of any stored MSN/Hotmail account passwords and then use that  information to extend their investigation. 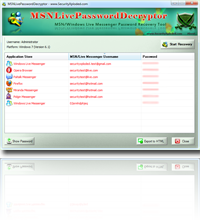 MSNLivePasswordDecryptor is the 41st tool being released on SecurityXploded.com and we have few more tools planned for the release before the dawn of the year 2010 !